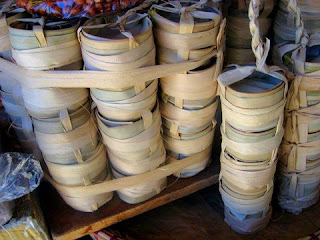 The woman said it was pakaskas, a snack made in nearby Isla Verde, the center of the center of global ocean biodiversity, the marine equivalent of the Amazon basin (she didn't tell me that, but wow!) with buri palm sugar .

I was fiending for some rice cakes to eat on the bus home and drawn to the pretty packaging, so I snapped a bunch up. I later discovered that every level held a layer of raw sugar and nothing more. Luckily, it was good enough to eat on its own. 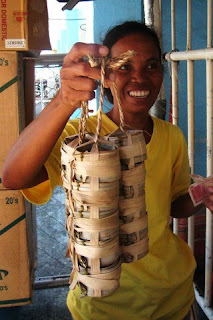 She sells sweetness by the seashore.

If you're from the Philippines, you probably own a buri hat, mat, box or whatnot, as the palm tree (Corypha elata) produces an ultra-versatile weaving fiber. We really should use it more often for less tourist-type applications, but that's another story.

You've probably eaten buri sugar a few times also. However, I'm betting you've done so unknowingly. A lot of it is sold as panocha (or panutsa), which is the general word for the solidified half-orbs of raw sugar. The sweet juice from this large tree must be boiled for about a quarter of a day, set aside, and then poured into molds (usually hard coconut shells). In this case, they were small casitas of palm leaves. 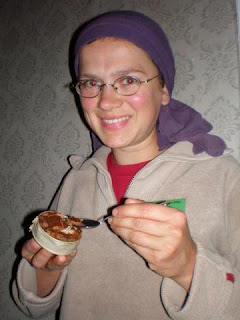 I even took some to Germany for others to try!

Until quite recently, I thought that palm sugar (aside from coco sugar, which has the advantage of scale and extreme export attractiveness) had gone extinct in the Philippines. I was wrong, but it's no doubt highly endangered due to the garangutan sugarcane industry, which I assumed produced all the panocha in the country.

We need to re-diversify our local sources of sweetness, which have dwindled continuously since the Spanish sugarcane assault of the 1800s. Let's resurrect the various palm sugars, honey, root syrups, etc. Life would be so much more interesting (and biodiversity would be in a bit better position) if we utilized them and enjoyed their nuances.