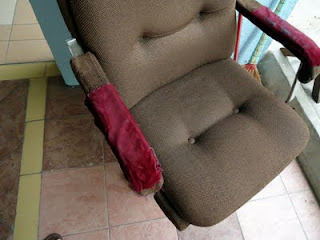 New fabric on the armrests of a swivel chair, parked in Teka Market, Little India, where private space becomes public. 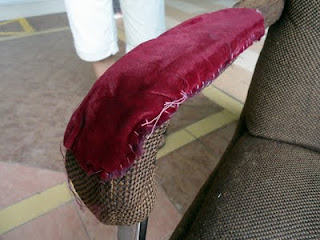 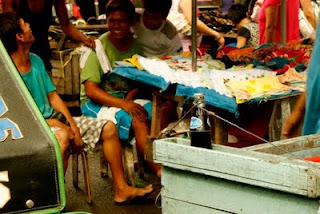 A Pop Cola bottle serves as a pole to wind a rope around, for securing an out-of-service rain-cover tarp. 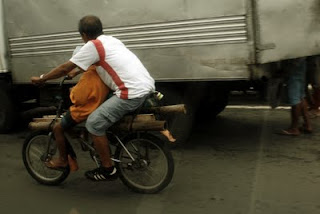 Improvisations on bikes to accomodate extra baggage (people, merchandise, appliances to be sold at junk shops) are fairly common. This particular one is made of bamboo. 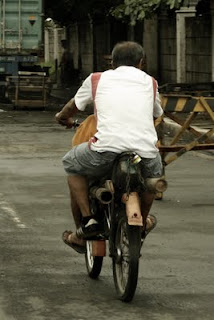 A Pedicab Of the Chinese Brave 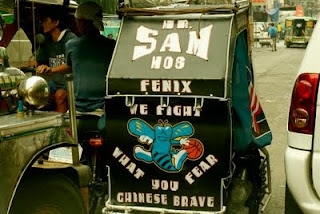 Mr. Sam Fenix We Fight What You Fear Chinese Brave

Off Samar is a wonderful island called Biri.

While the rest of the Philippines has a materials glut (men on bicycles selling fake DVDs around residential areas), Biri seems to keep things to a minimum and in circulation. 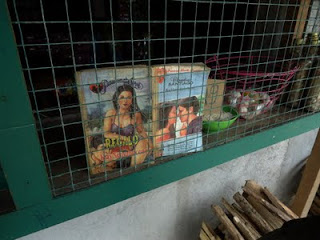 Not far from the above sari-sari store / romance novel rental place was a pirated DVD rental shop. Films were rented out at 10 pesos (no due date was given). The usual modern million-dollar movies were present-- every X-Men movie, high school comedies, bachelor party comedies. I rented a Polanski film but never managed to watch it, as island electricity shuts off at midnight.

We were running late for our boat back and attempted to get our moto driver to return the film for us. Apparently, there were two shops on the island, which one was it? I described the way it had the films in their plastic cases, hanging on clothespins. The driver said "Ah", stopped his bike to ask another motorcycle driver (driving in the opposite direction), to return it for him, and tossed the DVD across the air.

The stuff of small islands.