Before being dubbed "Williamsburgos", Poblacion was often referred to as "Old Makati" (the way we refer to Escolta and etc. as "Old Manila"), with its centuries-old church, wet market, and old homes. I was delighted to find out, rather belatedly, that Semana Santa or Holy Week in Poblacion is a super big deal not just for its residents but for devotees from all over the metropolis, who make their way here each year to view and participate in the procession and pabasa. I am fascinated by it all, but am actually late to the game of appreciating religious celebrations, so I hope you forgive me if I have inaccuracies or incomplete information.

Each neighborhood is loosely organized into a samahan (association) that builds and manages a kubol (literally, a kind of temporary shelter or booth) each with its own unique religious statue (or two). The kubol is actually a tableau that is to be part of the kalbaryo, a procession narrating Jesus' journey of suffering up until his crucifixion and burial. You will find constructed scenery of differing quality, sometimes just a single printed tarp as background, other times, an elaborate, perya-horror-house levels.

The kubol is also the site of a kind of marathon pabasa–literally a "reading" of the pasyon, Jesus' life and suffering rendered into Philippine epic narrative form. It is generally read from a book and sung to some tunes commonly used for the purpose (most are played over speakers in MIDI form). The pabasa is activated on Holy Wedesnday (when a procession places a crucifix in each kubol) and ends on Good Friday. I heard that our local parish priest had called out in a disparaging manner that some people use recordings of the pasyon instead of actually singing or reciting it. Interesting how a syncretic element has become something of importance to the Church institution itself!

In the days leading up to Holy Wednesday, a fiesta-like atmosphere prevails. Streets are closed off, residents loiter around both the construction of the kubol and the decorations of carriages that will ferry the statues around during Holy Friday procession. But even before either the processions or pabasa begin, some casual drinking and loafing occurs at the newly "opened up" chunks of public space. There are always opinions being flung around about this floral arrangement or the color of some faux rocks.

Solicitations also abound at this time for things like construction materials, official samahan t-shirts, and refreshments for devotees burning the midnight oil at the pabasa. Our local samahan promised, in exchange for our donation, unli-coffee and the privilege to hang around anytime. And because Holy Week this year came right before the mid-term elections, mayoral and konsehal candidates topped the handwritten lists of donations that hung at almost every kubol, a soft form of campaigning achieved by donating around Php500-Php2,500.

Kamuning Branches for a Kalbaryo

A week before Semana Santa or Holy Week this year, a couple of men began pruning our neighbor's kamuning (orange jessamine) shrub. I stepped out to "salvage" some fragrant flowers and have a chat with them. I learned that every year they prune the tree free of charge, using the hardy citrus-like foliage to dress up their neighborhood kalbaryo in Mandalauyong. 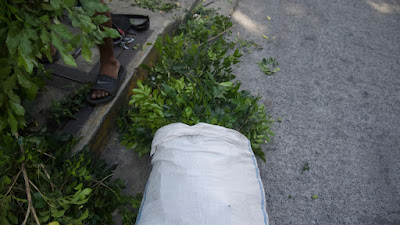 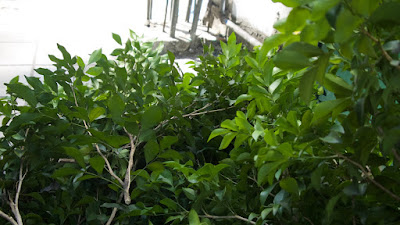