In Defense Of Mangroves 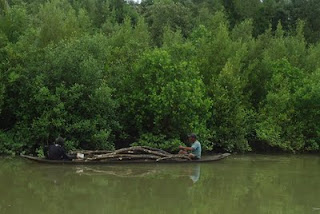 A flat-bottomed boat along a Calbayog mangrove.

(Or, sticking up for the disappearing habitat, and the culture that is born out of it. This is an attempt at a sort of mangrove "series".)

Mangroves, or trees that grow in intertidal (foreshore) areas, are a thing of beauty. They jut out of the water with amazing root structures. Because our country has one of the longest coastlines in the world, our beaches should be lined with either mangrove areas, marshes, or rocky surfaces to take yoga pictures on. Note that I did not mention white sand beaches, which are few and far in between in "nature" (more on that later). 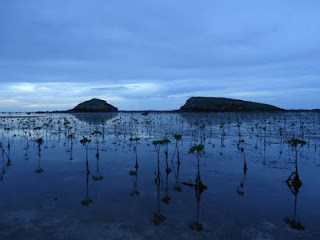 But mangrove areas are not sexy. While they provide waste treatment (they are known as the "kidneys of the earth"), flood protection, and shielding from waves and wind, they are also a tricky habitat for moderns. The water is murky, and there are many living things in it. They filter water coming down from higher land, and solid waste gets stuck in their root systems.

As I mentioned in an old post about Quezon, mangrove areas are the middle ground between the ocean and land. Most marine species spend important time in them. As with any two elements meeting, there is a particular explosion of life. That is how reality works, even in matters of culture. 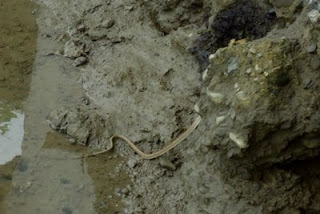 A mangrove snake, coming up along the bank.

Which brings us to the next thought: when historians say that human settlements formed along rivers and bodies of water, a big part of this was seeing mangrove areas and thinking "FOOD". Even today, in coastal areas, going out to fish in the middle of the ocean is, as I observe, often supplemented greatly by crab culture, brackish water fishing, and snail (and whatnot) collecting in mangrove areas or mudflats with flora. Also, because of weather considerations, people almost never camped on naked beachfronts. In fact, in the South Asian tsunami aftermath, it was found that areas with mangrove trees were not devastated. 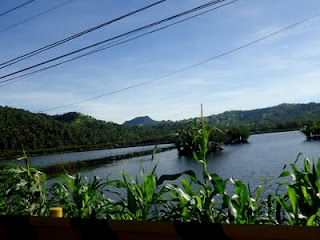 The view along a bridge: corn on the bank, and nipa groves in the middle of the river.

Get it? People didn't prefer to settle on a powdery white strip of sand, for obvious reasons. They didn't chop down mangrove trees either to make way for a "clean" view of the ocean. Also, only the foolish would take the tuft down entirely for firewood.

Samar is second only to Palawan in terms of mangrove area remaining (65,119 hectares)-- and the place will continue to be important as mangroves are on a downward trend (we've halved their area in less than a century). Because one cannot ignore the connection between remaining mangrove cover and the "lack of development", we need to pay special attention to leveraging the fantastic productivity of the ecosystems, and preserve these last fronteirs of mudcrabs, canoe commutes, and fermented fish industries. 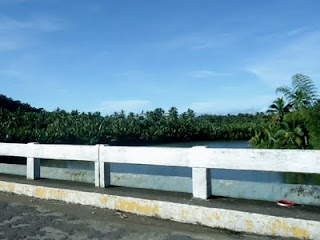 This means intercepting idiotic things like the reversal of protected area legislation to build new highways (instead of designing around them), like us crazy Manilans just did with the new C5, and are continuing to do with the new Cavite Expressway. This means acknowledging that the lack of zoning by ecosystem, and the stupidity of development that doesn't respect or leverage nature ("I don't like this river, let me cover it up"), and facing the fact that lost mangrove areas are not only contributing to massive flooding in the country, but also improverishing people (by removing resources previously abundant and "free") within the span of a generation. All us lowlanders have our roots in this kind of environment, so it's worth giving it some thought. 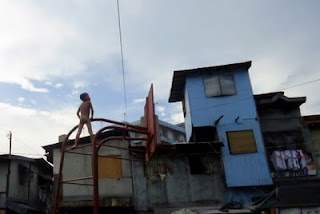 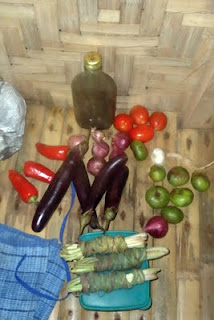 Some of our ingredients: lemongrass, eggplant, peppers, tomato, souring batuan.

When staying in one of those "underground" huts, be prepared to bring your own ingredients. It's better to come with a little bit of them when you arrive. As with a certain hotel in a certain Eagles song, you may have an easy time settling in, but a terrible time trying to find transportation into "town". 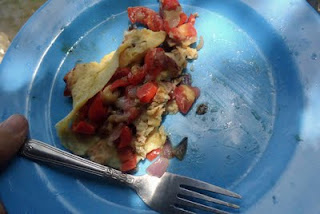 Sometimes, remote homes in the Visayas will have pork fat on stock for frying and flavoring dishes. Among the thatched houses you will see smaller abodes devoted to sheltering pigs. Helping your neighbor slaughter will get you some portions and a bit of fat. Sorry if you're vegetarian, but that's how it goes. If you have problems, take one of those little wine bottles you go through in the airplane, and fill it with your oil of choice. 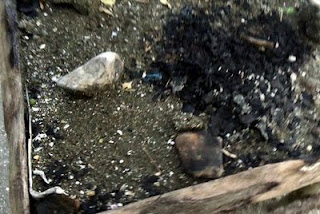 The Samar beachside cooking area is usually composed of a raised bed of sand, held in by coconut board. On this sand you will place several stones to hold your pot up, under which will be pieces of wood or charcoal (made of either coconut shells or mangrove trees). Think positive thoughts and enjoy the al fresco cooking. Every meal you have here will be awesome.

Hut Living, or, Finding A Random Place to Live Where There Is No Tourism Industry 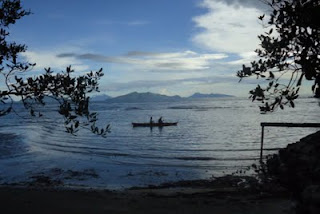 Our trike driver (who, in the next few days, would give us a tour around his 'hood, pointing out his mom's house and other significant places) took us to a beach called Baot. We tried several others before coming here, but none the huts were available for rent anymore (one had animals living in it). This was about 20 to 30 minutes from the airport. It would take an hour's walk to the main road.

We had instructed him to take us to a hut. We were harboring dreams of working from a hut for a week while listening to the waves. 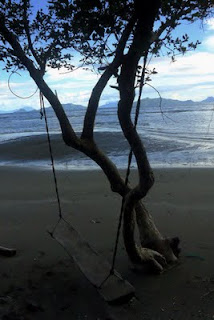 A swing made from driftwood.

Baot has a beautiful view of a mangrove flat. One family inhabited this shoreline, and it was a draw for very local beachgoers (this means teenagers cutting class, or people from nearby barangays renting huts to eat and drink in for the day). 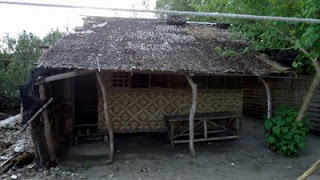 There was an overnight hut, available for 200 pesos a night. It had a receiving room and a "master's" bedroom. Oddly, the whole floor area, save for the restroom, was covered in old carpeting. And the bedroom walls, presumably to dissuade little children from peeping into the holes that occur in natural building material, were covered by flapping curtains with poinsettia print. 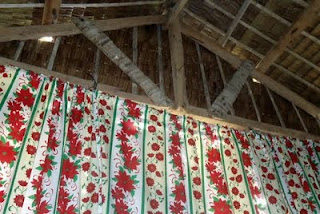 To be in a room of synthetic poinsettia fabric is an experience in itself.

Now, if you are looking for basic huts along uninhabited beaches, always remember that locals have dibs on defining entertainment for that area. And that means videoke-- lots of it. 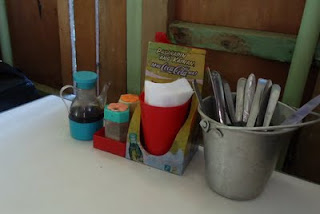 Where to gather information about a place before venturing out? We always check out local carinderias, coffee shops, or the type of restaurant that has "regulars" (or, in other settings, tables with assortments of events flyers or local papers) before venturing out into a completely strange place. This is because, when you buy a meal (or even a rice cake) from someone, you are automatically granted the right to ask questions without being a pest. 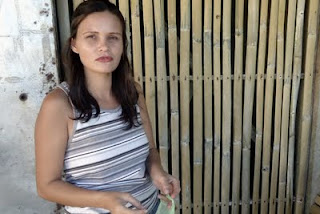 The very helpful lady we pestered at our first stop.

In addition, by asking peripheral questions, you get a better idea of the context that now surrounds you.

By the extreme curiosity drawn forth by our mere arrival in Calbayog, it was apparent that tourists were not arriving in droves. The rental of this relatively large carinderia space was 1,500 pesos a month (approximately 35 US dollars). Save for us, there were 3 other people eating, all airport personnel. This was not going to be your bustling semi-city. 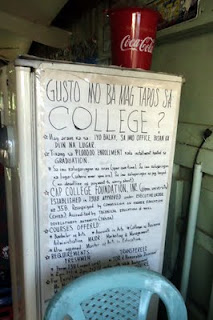 A handwritten ad for an "open university". 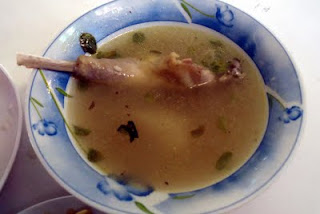 Chicken tinola made with backyard fowl.

Rob ate his chicken tinola-- made with the "native" chickens that are less meaty but make for a tastier broth-- as the waitresses chattered away, giving us suggestion upon suggestion. It was a relaxing atmosphere, sunlight coming through the windows, which were decorated with amazing strung folded pieces of plastic straws and cigarette wrappers, something the women did to keep themselves occupied when there was nothing else to be done. 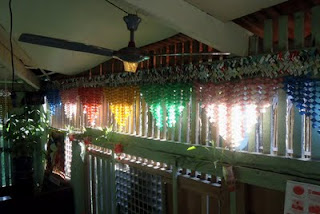 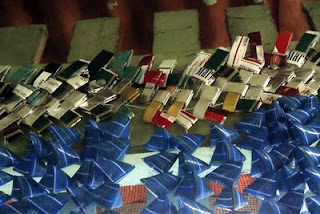 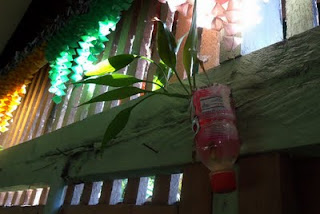 I was distracted by the ornamentation of the place. I love carinderia decor because it is honest. I don't mean to sound trite, but the conceptions of beauty are very simple. 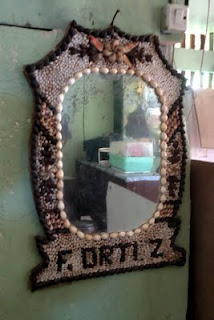 The owner of the carinderia is named Ortiz, we gathered.

Eventually, the waitresses told us to go to a certain beach where we could find cheap huts for rent. One of the waitresses took us aside and whispered the standard tricycle price, to prevent us from getting ripped off. As we contracted the services of one tricycle driver (which one diner had hollered for across a hundred feet), all waitresses stood observing, like guardians of the proper fare range. There is no standard fare in Calbayog for anything, by the way. There is only you, the driver, and the moment you are sharing. Speak quickly, and fairly. 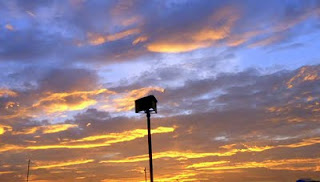 Touchdown from a 530AM flight. Groan.

We booked a cheap air ticket to last year to the least-familiar sounding place we came across. It was Calbayog, Samar. 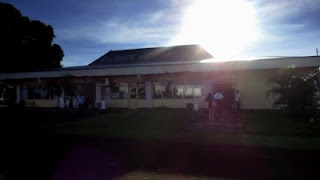 There is not much information on Calbayog, and things never turn out how they are written anyway. So we did not have anything in mind when we arrived at the small airport. 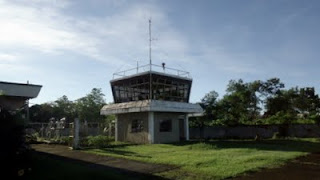 They do this thing where they corral everyone inside a small area upon walking in. They close a large wooden "gate", and you are essentially trapped. There is a glass door to your left that is padlocked with a chain, and outside, a closed gate which separates you from a horde of waiting tricycle drivers.

They empty the cargo area onto a trolley, and lay them down in the middle of an empty area. Once all bags are lain on the floor, they open the "gate" and everyone scrambles in to collect their luggage. 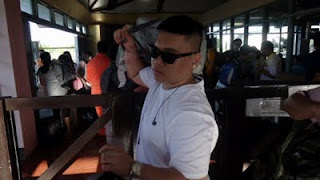 An army dude collects his bag.

Be prepared to have the usual persistent tricycle drivers try to badger you into riding their charming little carriages. You don't blame them either-- there are really very few people coming in, with most airlines only touching down two or three times a week, and the airplanes are small.

A "special" trip out to Calbayog City (or other areas that are close to the airport, which is actually in Sabang) will cost you around 90 to 150 pesos, depending on how good you are at haggling.

As we didn't know anything about the place, as usual, we first hit the carinderia.