I've been quite busy in the past few months. Thanks for the emails. I've been ever the itinerant, and only of recent have been united with my laptop. Enough to post one or two things, hopefully more...

I'd traveled to Dipolog recently. The city is small, clean, relaxed, and has an unusually low population. Trade is far from brisk, because of the transportation situation. There is an airport in the area, but shipping is another thing altogether. The place does not seem to have a lot of local crafts-- many of the goods are sourced from Bohol.

There are no taxis in Dipolog. Everyone gets around by walking, riding jeeps or private vehicles, or taking tricycles. The tricycles are inexpensive. Ten pesos gets you from the airport into town, and twenty pesos to the airport (under the assumption that they will not have any human cargo going back into the center). 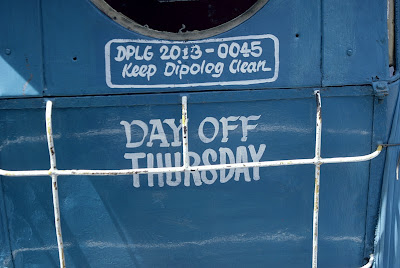 Also cute, is that they list their "days off" on the back of their tricycles. This is presumably to regulate the amount of traffic. Another possibility is to keep tricycle-driving viable. In the absence of a scientific method to analyze population-to-tricycle ratios (and with cab drivers in Davao complaining about the glut of cabs that basically makes a lot of them sit around, passenger-less all day) this might be a good idea. 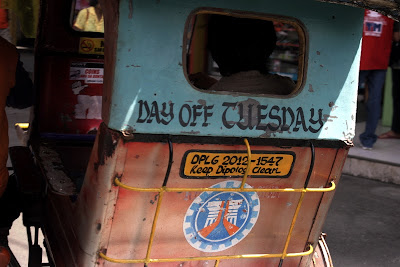 Other cities like Dumaguete have proposed (and tried, and failed) color-coding their tricycles for easy identification of those that should not be on the road. 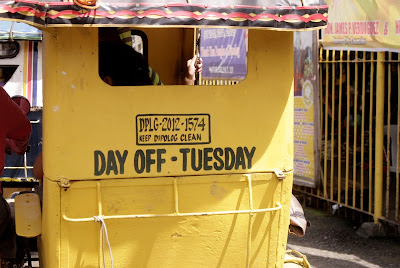 In Dipolog, the days off are painted on the back of the passenger chamber of the tricycles, together with the tricycle's registration number and the sentence "Keep Dipolog clean".