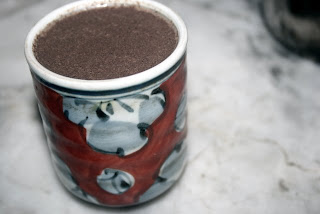 A thick cup of home-dried, home-roasted cacao with coconut milk from the garden. Sarap.

Migration is a beautiful thing. Like the ocean carrying coconuts onto strange shores and growing themselves into the palm-lined beaches we so love, the force of human decisions shuttles people and produce across timezones and shoves them into different contexts. Such are the stories of our ancestors, and much of the food that we love. 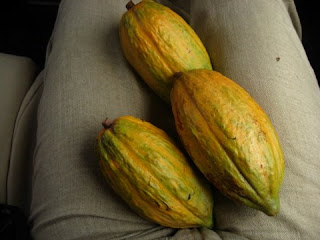 Three pods. You can tell if it is ready to eat when you shake it and the mass moves around, there is a layer of air between the skin and the fruit. 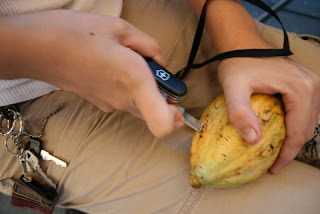 Cacao arrived in the Philippines during the galleon trade. Commonly taken in the form of a bittersweet beverage, it brings us back to our Rizal required reading from school. We remember cacao as it was related by a mayor to his fellow Spaniards in Noli Me Tangere (typed out by A Scientist in the Kitchen):

“What!” the startled visitor would ask, “does he poison people? Carambas!” 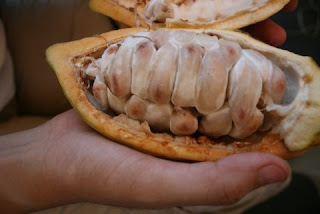 The fruit has thin but fabulous sweet flesh.

But we are of the opinion that this was a slander on the part of the alferez, since the same story is told of many curates. At least, it may be a thing peculiar to the Order. “ 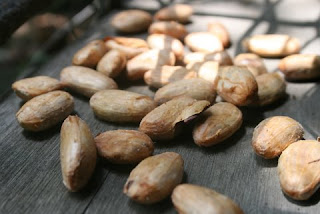 The cacao tree is a humble one, not particularly beautiful, growing well only under canopies. Taken from the forest basins of the Americas, they have traveled well into our muggy, tropical island setting, cultivated in some large plantations and agroforestry areas, and, as anecdotes reveal, in numerous backyards all over the country. There is still considerable backyard production and kitchen processing going on to turn cacao beans into tableas, most especially in the province. There are pockets of morning beverage self-sufficiency in our country (this includes coffee production as well). 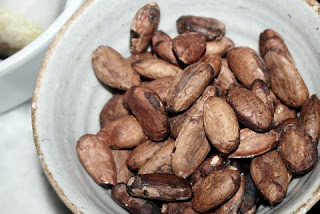 All dried and ready to roast.

I took my fruit from my great-uncle's house in Metro Manila. The pods had been given all these years to the gardener, whose mother would do the tedious processing. As I am not schooled in these matters, I enlisted the help of Wilma, who is from Zamboanga and has been eating and growing the stuff since childhood. I have read about cacao processing in books, but I wanted to get an idea of how it is processed by normal people for everyday consumption. 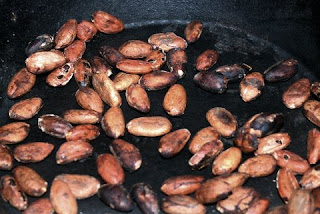 Seeds roasting on an iron skillet.

The pods at the top of this page yielded many seeds, covered by fruit pulp that is absolutely delicious. I would describe the taste as sweet yet tart, like a mangosteen or a nice yellow mango. The "beans", which look a bit like rambutan seeds, were set out to dry. After they were suitably devoid of moisture (a few weeks, given the rain), they were roasted. I thought them to be a bit burnt, but Wilma insisted that was how they liked it. 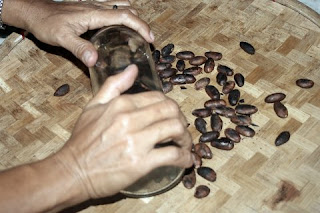 Just as our house was filled with an aroma good enough to marry, we took the beans off and put them on a bilao (bamboo tray). Wilma used a glass bottle to crush the crunchy beans and force the skin to separate. She did this in a hurry, before everything cooled off. 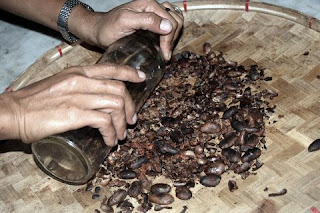 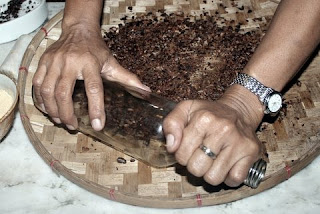 We then ran out into the garden and got rid of the skins directly into the soil by the same movements that people use to winnow rice. The instructions of blowing the skin away with a fan seem quite comical and devoid of integrated daily exercise, once you see how gracefully the skin floats to the ground for decomposition. 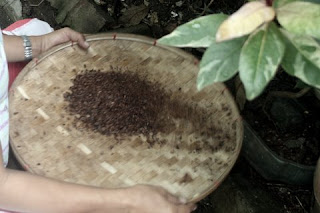 What we are left with are cacao nibs, the much-hyped "superfood" and relative newcomer to the culinary world. A whiff at this point is pretty sublime. 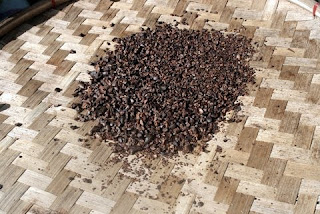 We decide to grind this for drinking chocolate. We first used a mortar and pestle, which proved to be too much even for our idle, chatty selves. A coffee grinder works nicely. 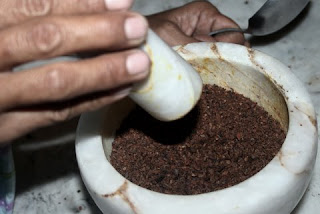 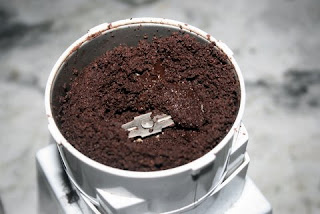 The moisture is coming up. 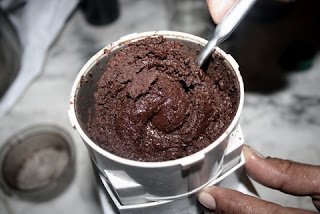 Once the paste was finished, we scouted the kitchen for a suitable mold. This we found in an old spice jar cap. We washed the paprika out of that and pressed the paste in. 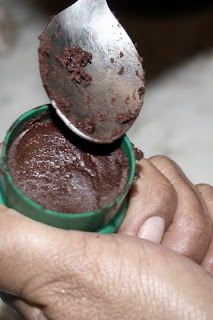 Standardization is important to us.

You can tamp it out with a bit of difficulty. Cacao, at this stage, becomes the consistency of your high school experiment of baking soda and water. It seems solid, but when you press your finger against it, there is a slow melting that occurs. Thus, you cannot scoop it out of the mold without damaging it, you must pound it onto a solid surface with some force. 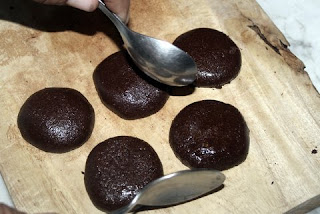 From three pods, we get five 1-inch tableas.

My excitement was barely enough to contain, so I plunked two of these still-soft tableas into a pot and whisk them with water into tsokolate, kakaw, cacao, chocolate-eh, whatever you may call it if you are from these islands. I feel I've come a bit closer to the holy grail of my cacao-loving conquest. 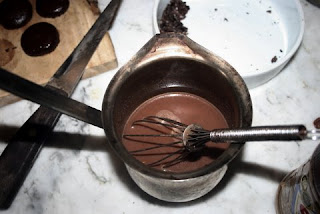 Some things to change next time: It was a bit darkly roasted, moreso than I am used to. Though delicious in its own way, I think I will decrease the roasting time. I was left with bits of the bean at the bottom of my cup, which I ate. Yes. I ate them, but it could have used a finer grind, so I may as well invest in a Turkish coffee grinder. 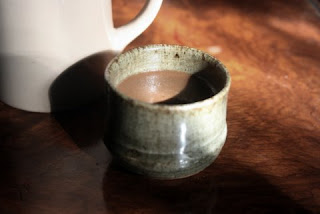 Basking in our achievements. Wilma said my mix is too bitter.

The coffee berries in our garden are supposed to turn from tough green to red soon enough as well, and I am quite excited for that cup as well. The romance of coffee and cacao drive their global commodity markets, fuel slick/quaint marketing campaigns. But in the end, when you are faced with a fruit, a seed, it is stripped of mystery and faraway processing, waiting to answer, firsthand, the stupidest questions that most people never ask. Your infatuation ends and your real, deeper relationship begins.