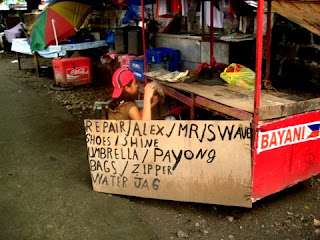 Preparing for a day's work-- the sign doubles as a cover for the compartment containing old shoes and more. That is obviously not Alex doing the fixing.

I finally took a photo of this repairman's stall that I often pass. The sign says:

The use of the slashmark is actually pretty effective in compensating for the poor handwriting (spacing problems, perhaps). There is only one word translated into the native language (payong means umbrella), while the rest would be understandable to any Tagalog speaker. In all, it's pretty charming and straightfoward.

(Although I do wonder how the same guy repairs water "jags", and what kind of water jugs he can mend with the same tools he uses for the other goods on the list.)

This Alex fellow chose to give himself a nickname "Mr. Swabe", another way to spell "Mr. Suave". This persona infiltrated national consciousness five years ago as Parokya ni Edgar launched their 70s-inspired song (see video below), which then brought about a movie with a protagonist called Rico Suave.

(You can also find an English translation of the lyrics on this blog.)